Featuring responses to both present and future contexts that reflect on the relationships between technology, our environment and personal experience. ALTER//SHIFT//CONTROL investigates the possibilities of new spatial definitions and our perceptional and cultural shift to a new sub-dimension.

The human race is positioned to radically alter the way in which we perceive and experience our environments. The doors are now open for the creation of a fully 'technonatural' state, in which the division of technology woven into the fabric of humans and their environments becomes invisible. The exhibition seeks a cartographic vision of the landscape of the future, laced with omni present webs of technology, embedded throughout our urban architecture. To charter realms of digital consciousness and to contemplate a second Age Of Discovery with trails blazed by 'Neo-Pioneers' across the interstellar void.

The past century saw many hypotheses on what the future would hold, eccentric visions of space exploration fused with technological conjecture captured the imagination. It could now be said that we stand on the brink of a new era where many of these visions are becoming reality. Is this really a pivotal period, or are we echoing our predecessors by misjudging our ability to create the extent of our imaginations in the laboratories? 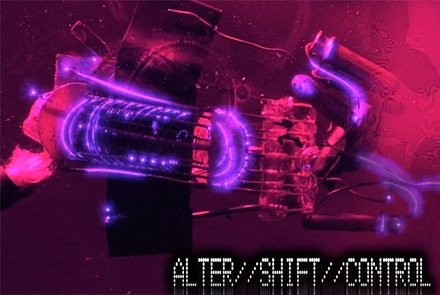